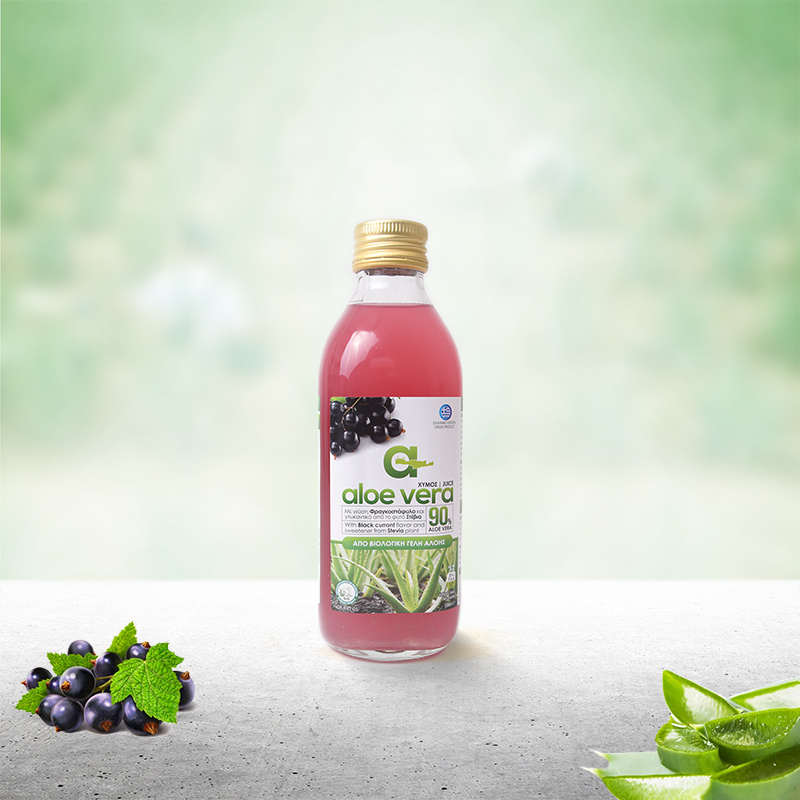 Natural ALOE juice with organic gel (GR-BIO-01) content 90% from certified plants of the variety barbadensis miller and condensed black currant juice in a glass bottle. Without added sugar, with stevia.
Its seeds are nutritional, refreshing, with especially high content vitamin C (200mg per 100g seeds). It is considered that they activate people’s immune system, while they have a microbicidal action to infections of the respiratory system, the flu and viruses. Its seeds have vasodilating effect and function as factors that reduce blood pressure.
The recommended daily dose is 60ml.

Gooseberry either red or black or yellow, has high content in vitamin C, minerals, fibers and antioxidants.

Properties that render it one of the best fruit, very useful for infectious diseases and infections. It whets the appetite if it is consumed before meals, while it facilitates the digestion if it is consumed after the meal.

It has been found that the black gooseberry has a quantity of vitamins C, B, P, Ε, pro vitamin Α, potassium, phosphorus and iron.

Its seeds also have high content in tannins and anthocyanins which are antioxidant substances. Also, they are considered to have vasodilating effect.

It contains vitamin C, tannins and essential oils that are considered to be diuretics, they reduce uric acid, they relieve from rheumatic pains, arthritis and gout.

Also, they favour the cortisone secretion, from the adrenal glands and they are considered to be antiallergics against some allergies.

Because they contain flavonoids, they reduce blood pressure. Pectins that are contained in its seeds, act against diarrhea, the treatment of allergies and migraines that come from allergies or sniffle, and different abnormalities of the liver.

Also, they are considered to activate adrenal glands, kidneys, pancreas and the liver.

They are considered to be effective against asthma, chronic bronchitis, το emphysema and allergic rhinitis.

- It has diuretic effect.

- It has anti-allergic effect.